Sharia Law in the Middle Ages 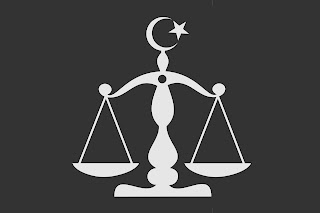 Christians and Jews living in Muslim-controlled lands in the Iberian Peninsula were subject to Sharia Law...to a point. Sharia (sharī'ah) in Arabic refers to God's immutable divine law, as opposed to fikh, secular interpretation of the law. The word appears exactly once in the Koran, defined as "way" or "path." It is used as the Arabic translation of the word torah in a 10th-century translation of the Torah.
The teaching of the law was not dissimilar to what we saw in medieval England. Arabic Madrasahs were similar to the English Inns of Court. The Latin qualification licentia docendi ("license to teach") was identical to the meaning of the Islamic ijazat al-tadris wa-l-ifta. (Note: the Latin phrase could be abbreviated "ld" but this is not the origin of LLD, Doctor of Laws.)
Islamic law studies had different statuses: faqih was a Master of Law, mufti was a professor of legal opinions, and mudarris was a teacher. These parallel the Medieval Latin terms magister, professor, and doctor. The mufti and the professor could express their opinion on what the law meant—even if they were wrong.

Sharia drew distinctions between men and women, Muslims and non-Muslims, free people and slaves. In many situations a woman's worth was considered half that of a man. A husband's financial obligations, however, gave wives some protection against divorce and following poverty. Women could be plaintiffs or defendants in Sharia courts, without having to rely on a male representative. A Muslim man could marry a Christian or Jewish woman, and she was allowed to worship at her own church/synagogue.

Non-Muslims were considered dhimmi, which literally means "protected person." This status was given to Jews and Christians, who were "People of the Book" (the book being the shared Old Testament). They had certain privileges—although in many cases "permissions" might be more accurate—and certain obligations. Dhimmi paid the jizya, a tax on non-Muslims residing in Muslim-controlled countries. If you were not a dhimmi but were, say, a pagan, you were not required to pay the jizya; you were required to convert to Islam or face death. (Later, dhimmi status was applied to pagans and many more types, such as Zoroastrians, Sikhs, Hindus, Jains, and Buddhists.

This is obviously the briefest of looks at Sharia law and how it might affect folk in the Middle Ages. I think it's time to head north. Tomorrow I'll talk about the above-mentioned Inns of Court.