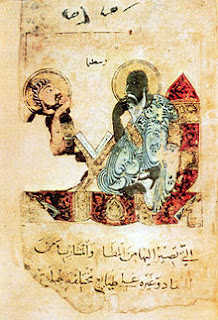 De Gradibus (Latin: Concerning degrees) was written by the Father of Arab Philosophy, Al-Kindi (801-873CE). In it, he applies mathematics to medicine, demonstrating a method he invented to determine the proper strength of a drug for a patient. Also, he discusses the degrees of the phases of the moon and how they help a physician to determine the most crucial days of a patient's illness.

When it was translated into Latin, the complex mathematical reasoning made it difficult for Western Europeans to grasp. Roger Bacon appreciated his approach, and endorsed it thusly:

The degree can only be determined by the method taught by Al-Kindi’s De gradibus, one extremely difficult and almost entirely unknown among Latin physicians of these days, as everyone is aware. Whoever wants to become perfect in this philosopher’s art must know the fundamentals of mathematics, because the species of greater and lesser inequality, the species of ratios, and the very difficult rules of fractions are all used by this author.

Plinio Prioreschi, a 20th century expert on the history of medicine, credits Al-Kindi with the earliest attempt to quantify medicine.

Al-Kindi was heavily influenced by noted Greek physician Galen (129-216CE). The stereotype of a Muslim rejecting any non-Muslim source of knowledge is tossed out by Al-Kindi's approach to knowledge. He wrote:

We must not hesitate to recognize the truth and to accept it no matter what is its origin, no matter if it comes to us from the ancients or from foreign people. My purpose is first to write down all that the ancients have left us on a given topic and then, using the Arabic tongue and taking into account the customs of our time and our capacities, to complete what they have not fully expressed.