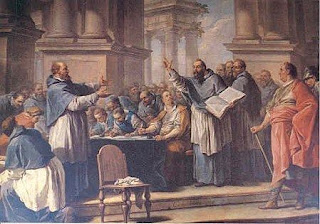 In Northern Africa, specifically the area we now call Algeria, a Berber Christian bishop created one of the first schisms in the Catholic Church. I'm talking about Donatus Magnus, who died around 355CE.

Christians in the Roman Empire were persecuted prior to Emperor Constantine (274-337CE). Many church leaders turned over their scriptures and paraphernalia instead of defying imperial writ. These traitors to the faith were labeled traditors (literally "surrenderers").

Donatus was adamant that services or sacraments performed by traditors were invalid, and that they needed to be re-baptized into the faith if they intended to act like clergy again. If they were not re-baptized, then those they baptized would not truly be members of the Church.

Now there were two Bishops of Carthage and Primates of North Africa. Each of them went on to consecrate bishops, ordain priests, baptize people and deliver sacraments, and soon there were cities with two bishops, one under Caecilian, and one in communion with Donatus. The Donatist group appealed to the Emperor, who wanted nothing to do with it and passed it to Pope Miltiades, who was of Berber descent and therefore linked to the people of North Africa.

Miltiades summoned each to a council in October 313. The Donatist arguments against Caecilian were brushed off, so the Donatists stormed out. Miltiades then affirmed Caecilian. The Donatists appealed to the Emperor again, but the Council of Arles in 314 again ruled against them. This started a trend of Donatist-leaning clergy to declare anyone they did not like a traditor and therefore invalid as priests.

Donatus continued to preach his cause and fight against Rome, with no major success, but it didn't die out easily. Tomorrow we'll look at how it survived for more than a millennium.