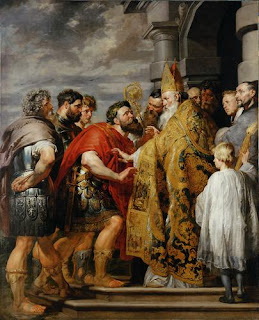 Although Constantine had called the 1st Council of Nicaea to make sure there was an established orthodoxy for Christianity throughout the empire, the resulting Nicene Creed did not accurately express the beliefs of all Christians. There were still many Arians who viewed Christ's nature as subordinate to God the Father. Constantine's son in the east, Constantius, was an Arian, and even exiled some Nicene bishops. His successor, Julian, rejected Christianity personally, and supported all religions. Julian's successor, the Christian Jovian, reigned for eight months before being succeeded by another Arian, Valens. By 379, when Valens was succeeded by Theodosius I, Arianism was the dominant form of Christianity in the Eastern Empire, while Nicene Christianity was dominant in the West.

Like Constantine, Theodosius wanted to establish a single Christian orthodoxy for the empire, and he issued an edict:

It is our desire that all the various nations which are subject to our Clemency and Moderation, should continue to profess that religion which was delivered to the Romans by the divine Apostle Peter, as it has been preserved by faithful tradition, and which is now professed by the Pontiff Damasus and by Peter, Bishop of Alexandria, a man of apostolic holiness. According to the apostolic teaching and the doctrine of the Gospel, let us believe in the one deity of the Father and of the Son and of the Holy Spirit, in equal majesty and in a holy Trinity. We order the followers of this law to embrace the name of Catholic Christians; but as for the others, since, in our judgment they are foolish madmen, we decree that they shall be branded with the ignominious name of heretics, and shall not presume to give to their conventicles the name of churches. They will suffer in the first place the chastisement of the divine condemnation and in the second the punishment of our authority which in accordance with the will of Heaven we shall decide to inflict.

Note the term "Catholic Christians." "Catholic" means "universal," and was an attempt to stress that everyone should have the exact same beliefs. (Of course, threatening heretics was also supposed to be a powerful motivator.) This edict was released on 27 February 380, and was followed in 381 by the first Council of Constantinople, which slightly revised the Nicene Creed.

Of course, enforcement of the edict was going to be necessary. In 381 there was an edict that forbade heretics from settling in cities, followed in 392 and 394 by laws forbidding heretics from living in Constantinople. In 383, Theodosius ordered all non-Nicene sects to submit written creeds to him for review. He declared them all invalid (Arian, Macedonian, Anomoean), except for the Novatian Creed (their big difference was that they claimed no lapsed Christian who had performed a pagan sacrifice should be allowed back into Christianity; what distinguished them from the Donatists was that Novatians did not submit to Rome, whereas Donatists followed Rome, but felt that some of their fellow clergy were traditors. Also, Donatists were willing to welcome traditors back into the fold with a baptism, whereas Novatians did not believe in second chances. Novatians were declared schismatics, and eventually also labeled heretics and persecuted. They survived until the 8th century.

The illustration on the pages is a painting by Rubens of Theodosius being refused entry to the church in Milan by St. Ambrose. Why this was the case, why Milan was important, and what this has to do with the decline of the Empire, will be next.

Email ThisBlogThis!Share to TwitterShare to FacebookShare to Pinterest
Labels: Christianity, Council of Constantinople, Council of Nicaea, Edict of Thessalonica, heresy, Theodosius I