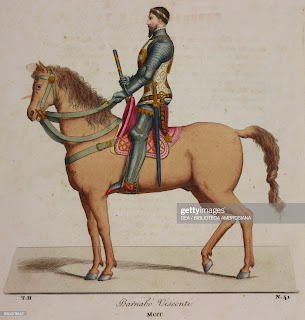 Poor Bernabò Visconti. Lord of Milan, not well-liked by his people, deposed and imprisoned (then likely poisoned) by his nephew. Of course, he did hassle his nephew's father, Bernabò's brother Galeazzo, and he did kill his other brother, Matteo, so in some ways he deserved the troubles.

Born in 1323CE, he became a Lord of Milan in 1354, sharing the title and responsibility with his brothers: Bernabò ruled over Bergamo, Brescia, Cremona, and Crema; Matteo had Lodi, Piacenza, Parma, and Bologna; Galeazzo took the western regions. Matteo died at a dinner, supposedly poisoned by his brothers.

Bernabò was at war almost constantly with Pope Urban V, possibly over a papal bull Urban produced. In 1356 he offended the emperor, and had to fight off an attack on Milan. He was declared a heretic by Pope Innocent VI, and excommunicated in 1363. In 1373, he was excommunicated again, but the papal delegates sent to deliver the official document were arrested and forced to eat the parchment, the leaden seal, and the silk cord rolled around it. This did not help his case with the pope.

The citizens of Milan did not see that his actions were for their benefit, or in any way reflected well on Milan. A statue of him on horseback was commissioned—in itself not unusual for a ruler—but its placement near the main altar of San Giovanni Church was seen as inappropriate. He became such a well-known symbol of corruption that he made it into Chaucer's Monk's Tale in the list of tyrants.

His brother Galeazzo's son, Gian Galeazzo, handled the problem of Bernabò by deposing him, imprisoning him, and likely poisoning him shortly after. The sculptor of the equestrian statue, Bonino da Campione, made a few alterations to the statue so that it would be suited for its new purpose: as Bernabò's funerary monument. It now lives on in Milan's Castello Sforzesco.

I cannot leave this family yet, because there is another link between the Viscontis and Chaucer, which I will go into next time.