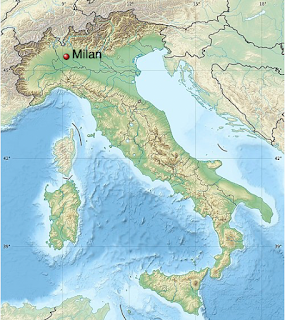 In 286CE, the Emperor Diocletian decided that the capital of the Western Roman Empire should be Mediolanum (Milan) instead of Rome, leaving Maximian to rule there while he ruled the Eastern half from Nicomedia. The origin of the name "Mediolanum" is in doubt: a case could be made that it is Latin for the "middle of a plain," but it originally was a Celtic settlement, and so it could come from a Celtic root llan meaning "church."

Whatever the case, the area was rich for farming, vineyards, and raising wool-bearing sheep, so it could support a capital's population and preference for opulence. That environment—as well as its position in the north, just below the Alps—meant it was the best point of attack for invading groups from Europe. Also, Maximian made it a more desirable prize by expanding: monuments, hot baths, palaces and official buildings; he surrounded it with a 4.5 kilometer stone wall.

The Visigoths attacked in 402, prompting then-Emperor Honorius to move official functions south to Ravenna. Half a century later, Attila the Hun overran the city. In 539 the Ostrogoths destroyed Milan during their war with the Empire. A mere 30 years later, the Lombards descended from the origins near the Elbe in Germany, conquered Milan, and settled in, giving their name to the Lombardy region. They surrendered the city to Charlemagne in 774.

There were more ups and downs for Milan in the turbulent centuries that followed, but the 14th century saw relative peace. Near the end of that century, Milan became a dukedom, a center of fashion, and one of the largest cities in Europe. Before I get to the first Duke of Milan, Gian Galeazzo Visconti, and his extraordinary dream of a united Italy, however, I want to talk about a group that was mentioned in the above paragraph for the very first time: the Ostrogoths.

Email ThisBlogThis!Share to TwitterShare to FacebookShare to Pinterest
Labels: Milan