The Massacre of Thessalonica 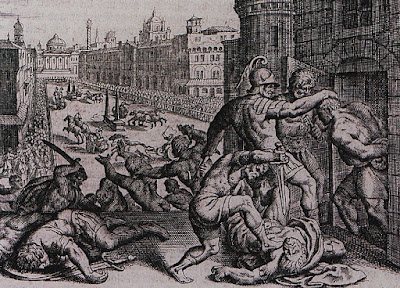 The following tale, like much of early history, cannot be confirmed, but it has come down to us as an actual event with actual consequences. During the reign of the Emperor Theodosius (reigned 19 January 379 - 17 January 395), a charioteer tried to rape...someone. It may have been a servant of Butheric, a Roman general. Butheric arrested the charioteer. The general populace demanded the charioteer's release, but Butheric was having none of it. They rose up and lynched Butheric.

Theodosius decided a lesson had to be learned. When a large number was gathered in the hippodrome in Thessalonica (southeastern part of Illyricum, or northeast part of Greece, if you prefer), Theodosius (or a local officer) set his troops upon them, killing 7000. (See the 16th century engraving of the massacre above.)

Whomever ordered the massacre, Theodosius accepted responsibility for it. Ambrose, the bishop of Milan, was appalled and outraged. He wrote to Theodosius to tell him he would not be able to receive the Eucharist until he repented. Theodosius accepted this, but only after eight months of being stubborn. That is the inspiration for the painting by Rubens of Ambrose denying Theodosius entrance to the church in Milan, displayed in the previous post. (The story was sufficiently popular that van Dyke later painted the same moment in an almost identical manner to Rubens' design.)

There was an earlier clash between Ambrose and Theodosius worth noting. Theodosius' court was not in Rome, but in Milan in northern Italy (hence the Edict of Milan, not Rome). In the 380s, according to one historian [Peter Brown], the need of this northern court for food motivated landowners to oppress and misuse their tenants to produce it. Ambrose opposed what he saw as abuse of the lower classes, speaking out about the need of the rich to care for the poor as was appropriate in a Christian nation. Christianity would not, however, affect politics as much as the Edict of Thessalonica would suggest. According to Brown, "modern scholars link the decline of the Roman empire to the avarice of the rich of this era."

But let's turn from people and politics for a bit and consider a place. A (brief) history of Milan is next.