Against a Sudden Stabbing Pain 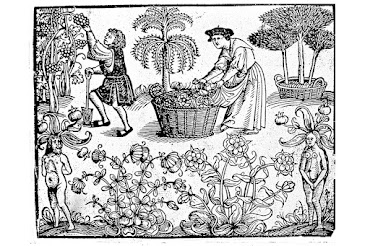 I want to talk about Wið færstice, an Old English medical text whose title is pronounced (roughly) "with fair-stitch-uh" and means "against a sudden/violent stabbing pain." It is a charm meant to be recited along with the use of a potion to cure a certain kind of pain. The potion was made of feverfew, red nettle, and waybread (plantain). Boil them together, and then boil the result in butter. A knife was dipped into the potion and then applied to the pain.

The 'stice' part of the name of the charm is related to modern "stitch" when we refer to a sudden sharp pain in the side. Scholars do not know if there was a particular cause for the pain; rheumatism or lumbago have been suggested, but in my opinion it was more likely to be what it was called: a sudden sharp pain, the kind that seems to have no particular trigger.

The creators of the text guessed at the source of the pain, and claimed their remedy would help in several cases, according to these lines from the charm.

ēse refers to the Æsir, the Norse gods; ælfe refers to elves; hægtessan refers to witches. The Wið færstice was supposedly good for pain caused by any of these supernatural sources. Whether it worked for anyone, we'll never know.

Another term for a sudden stabbing pain with no visible source was "elf shot," which I'll talk more about tomorrow.