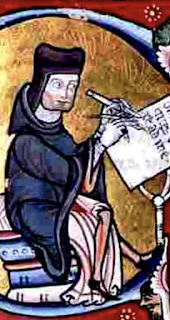 Peter Lombard (c.1096 - July 1160) was the Bishop of Paris and the author of Four Books of Sentences which became the standard theological textbooks for centuries. It was a compilation of sententiæ, authoritative statements on biblical passages. I'd like to talk about his conclusions on marriage.

Marriage customs varied among countries and cultures, and modern christian marriage requires an officiant (priest) and public statements about the intent to marry (banns) so that reasons why the marriage should not take place could be brought forth (such as a previous marriage, but yesterday's post made clear that more danico was not concerned about marriage being to only one person). Also, consummation was important, partially as a proof of the bride's prior status as a virgin.

Lombard had a different take on marriage, from his understanding of the Bible. Mary was married to Joseph, but she remained a virgin her entire life, rendering the need for consummation with a husband unnecessary. Pope Alexander III supported this notion.

Moreover, there was no priest to perform a ceremony in the Garden of Eden; it was sufficient for that marriage to take place in the sight of God. Therefore, what was the need for a priest? According to Lombard, the husband and wife need only profess their intent to marry. They could exchange the words "I take you as my husband" and "I take you as my wife" and their marriage ceremony was complete!

This was very liberating for young romantic couples (and older ones, I suppose), but this freedom was only to last for a couple generations. Innocent III would put a stop to it in 1215. Stay tuned.