Speaking of ailments caused by elves and other supernatural beings, "elf shot" was a concern in the Middle Ages, caused by invisible arrows shot by invisible elves causing sudden shooting pains. I am old enough to have experienced sudden sharp pains in limbs or my side, and I always assume it is simply the ravages of aging, or one of Hamlet's "thousand natural ills that flesh is heir to." 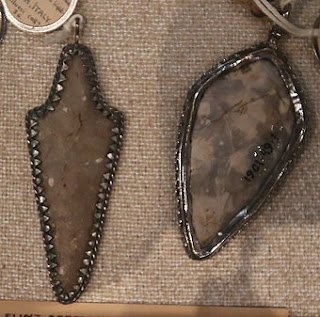 The Middle Ages understood enough about cause and effect to want to ascribe these pains to an external cause, and capricious and malicious elves was the best option. The Old English word aelfsogoða was used to describe internal pain from jaundice, and meant hiccups, also thought to be caused by elves.

The notion of "shot" was supported by archeological evidence; that is, folk in the Middle Ages occasionally found flint arrowheads left over from their neolithic ancestors. These were "evidence" of elf arrows. Dolled up and turned into amulets (see photo), they were worn as charms against witchcraft.

The cure was the concoction described in yesterday's post: feverfew, red nettles, way bread (European plantain); their vaguely spear-shaped leaves would make them suitable to counter an arrow wound.

Concerns about elf shot persisted. A report in 1884 from Orkney attributes the death of a cow from "her heart was riddled with fairy shot."

Going back a couple days...I mentioned St. Æthelwold's time spent at Glastonbury Abbey. It's a fascinating place, and will be the next topic.