I mentioned yesterday that, although Richard and Gunnor had several children, when one of them as an adult and Richard tried to make him Archbishop of Rouen, the church refused because Robert was considered illegitimate until his parents wed in a Christian ceremony. This does not mean that Richard and Gunnor were having children "out of wedlock"; just that their marriage was of a different form, in this case more danico. 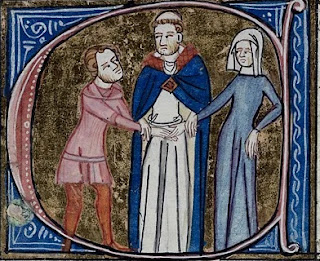 The phrase simply means "in the Danish manner" ("Danish" in this case meaning Norse, not just what transpired in Denmark). Germanic culture did not immediately adopt Roman law, but more danico marriages were not the same as modern common law marriage, which requires the couple to start living as and presenting themselves to the community as married. More danico usually involved a powerful male ruler taking a highborn (but lesser) woman and required the consent of the parents. (The consent could be gained later, in the event of, say, an elopement.) It also, we believe, involved a ceremony or ritual of some kind, maybe a simple handfasting. The children of such a union were not considered (in German culture) as illegitimate or non-inheritors.
More danico also allowed polygyny, the practice of a man to have more than one spouse, or to dismiss a wife with a word in order to take another; she had no say in the "divorce." The Roman Church increasingly discouraged any other ceremony than Christian marriage.
I'll tell you about one of my favorite christian marriage historical facts tomorrow.
Posted by Daily Medieval at 7:00 AM