So far as medieval records go, we usually have good lists of rulers and church personnel, especially since churches/abbeys are most likely to keep records. Every once in awhile, however, a chance archaeological find brings us new and unexpected data. 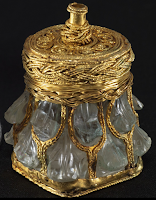 A metal detectorist in 2014 turned up a collection of Viking-age objects from around the tenth century, now called the Galloway Hoard. This hoard includes objects gathered from Britain and Ireland, mostly silver bullion, but also some unique relics.

One such relic took years to examine, because it was wrapped in a textile pouch. The decayed nature of the fabric stymied the researchers until they managed to use 3-D X-ray imaging to see what was inside without destroying the pouch.

The pouch contained a 2-inch tall jar made from rock crystal artfully wrapped with gold wire. The bottom of the jar has a gold base with delicate designs and the Latin inscription "Bishop Hyguald had me made." The name suggests a Northumbrian bishop, and is unknown in any existing records.

“The ones that I have seen are in the Vatican collection, where there are different forms of carved crystal columns. And so it was maybe 500 years old by the time it was transformed in the late eighth or early ninth century into a gold-wrapped jar.”

So the medieval relic could even be a classical Roman crystal jar, originally designed to hold perfume, but came into the hands of a Bishop Hyguald at some point who had the gold added for his own purposes. Although we have no specific record of a Bishop Hyguald, the name does show up in the Liber Vitae, but that's a story for tomorrow.