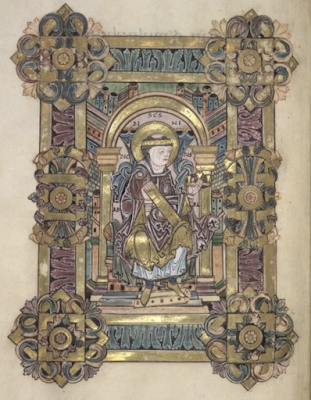 Æthelwold, one of the Three English Holy Hierarchs, saintly figures who spurred the revival of monasticism in England, was a truly saintly man. We know a lot about him from a surviving biography written by Wulfstan the Cantor.

He rebuilt or built many monasteries, including in Milton Abbas in Dorset, Chertsey in Surrey, Peterborough, and Ely. He reformed existing monasteries, driving out undisciplined monks and introducing the Rule of St. Benedict. His severity gives us the first example of miraculous events surrounding him: it is said that some monks who disliked his heavy hand put poison in his food, but he showed no signs of illness whatsoever. Speaking of food, while in Glastonbury, one of the duties he gave himself was cooking. One time, he resolved a scarcity of meat by praying, leading to a miraculous increase in the provisions.

Wulstan reports that he recovered unnaturally quickly from broken ribs after a fall from some scaffolding. Near the end of his life he was gravely ill, but bore his suffering patiently. After his death, on 1 August 984, miracles started taking place near his final resting place, and in response to prayers made to him for aid. A blind man from Wallingford was healed through prayers to St. Æthelwold.

His relics were then taken to the Cathedral in Winchester to signify their (and his) importance. Later, Abingdon Abbey received a finger, some hair, and arm, and his shoulder bone.

There is a single church dedicated to Æthelwold; it is St. Adelwold in Lincolnshire, in what would be fair to call an Elf village. I'll explain that tomorrow.