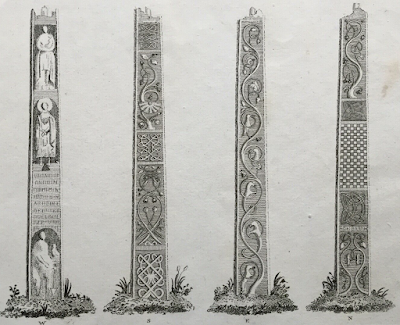 The Bewcastle Cross is one of two stone monuments from the same era with similar iconography. Standing 14.5 feet high (it would be higher, but the actual cross top has broken off), it dates from the 7th or early 8th century, like the Ruthwell Cross (see the previous post).

Also like the Ruthwell Cross, it is covered with fine carving, Christian symbols, and runic inscriptions.

Images include John the Baptist holding a lamb, and Christ with a halo being held up by two beasts, similar to Christ being recognized as dominant over beasts on the Ruthwell Cross.

One difference from Ruthwell is that we have some idea of who made the Bewcastle Cross. A heavily weathered inscription has been interpreted by some to say "This slender pillar Hwætred, Wæthgar, and Alwfwold set up in memory of Alcfrith, a king and son of Oswiu. Pray for their sins, their souls". This may refer to Egfrid, who was king of Northumbria from 670 until 685. Presumably this dates the pillar to after 685.

One feature of the Cross that distinguishes it from Ruthwell is the earliest known English sundial. We will delve into that tomorrow.