The word "consanguinity" comes from Latin consanguinitas ["blood relation"], and refers to having a close kinship with someone through a common ancestor. Laws of consanguinity—determining the degree of consanguinity allowed for marriage—varied from time to time and place to place 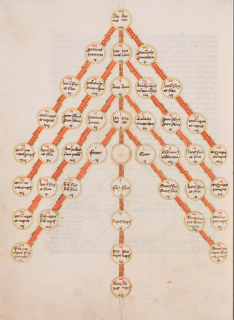 The early Catholic Church followed Roman civil law, which stated that couples within four degrees of consanguinity were forbidden to wed. This was determined by generations: you would count up the family tree to a common ancestor, and then down to the intended spouse. In the 800s this was changed to seven degrees by the church, and was determined by counting back seven generations. This meant that you could not marry if you had the same grandfather (or grandmother), great-grandfather, g-g-grandfather, etc., back seven generations. You could not marry a cousin, second-cousin, third-cousin, right up to seventh-cousin.

This made finding. spouse increasingly difficult, and dispensations by the church were becoming more and more frequent. The Fourth Lateran Council decided to deal with this by pulling back so that fourth cousins could marry at will.

Which brings me to Canon 50 of the Fourth Lateran, where the above change is stated and defended. But here's the funny part. In order to make a change to the rules of consanguinity, the Canon begins by stating that human statutes change over time, and after all God Himself changed things in the New Testament from what had been decreed in the Old Testament. With this reasoning, they state the change in the rules, after which it is stated:

Since therefore the prohibition of conjugal union is restricted to the fourth degree, we wish that it remain so in perpetuum, notwithstanding the decrees already issued relative to this matter either by others or by ourselves [Canon 50]

So...statutes can change, and that's why we can change this one, but it better never change again!

And speaking of laws that have changed, theyn also made some laws concerning Jews, which we will look at next.