The Book of Life

In the previous post, I mentioned that a certain name showed up in the Liber Vitae, a title which literally means "Book of Life" but was actually a list of names associated with a monastery or convent. There are several of these, also known as confraternity books. 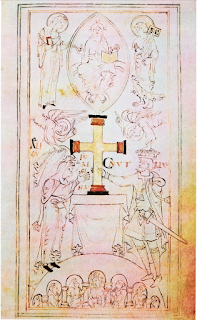 Confraternity books exist for the Abbey of St. Gall, for Reichenau Abbey, and for Durham Abbey, among others. The Durham book was recorded as early as 840, and continued into the later 11th century. A reorganization in the 12th century seems to have resulted in the loss of some pages. Recovered from the Cotton Library, it now resides in the British Library. Despite the incomplete nature of what we have, confraternity books still have value in helping us understand more about the past.

One of the values of the confraternity books is to linguists and historians, who can make surmises about culture and language from the names. The New Minster Liber Vitae is arranged in columns, with typical Anglo-Saxon names—Dunstan, Leofric, Ethelred, Wulfgar—in the center. To the left, however, are added names that were common after the Conquest in 1066: Baldwin, Simon, Richard, William. In it we see the cultural shift from the Germanic roots of the Anglo-Saxons to the new Norman French/Latin language shifts.

The picture here is from the New Minster Liber Vitae, produced in Winchester in 1031. It portrays King Cnut and Queen Emma, here called Ælfgifu. I'll tell you about her tomorrow.