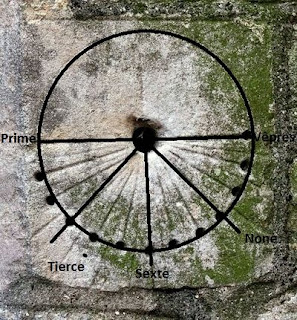 The Bewcastle Cross has what is considered the earliest surviving English sundial. It is actually a "tide dial." The "tide" part of the name comes from the Old English tīd, used to refer to hours, specifically canonical hours. The canonical hours are the specific times of day that require prayer. These times of prayer are also called "offices" or "divine offices," because they are an official set of prayers. The shift from "tide" to "hours" came after the Norman Conquest in 1066, when the Norman French hour replaced the Old English term.

So the tide dial shows the specific times when prayers are encouraged (but may also display hours of the day).

This is not to say that they did not recognize additional segments of the day. If you look at the illustration, you will see the words Prime, Tierce, Sexte, Nones. These refer to the First, Third, Sixth, and Ninth hours of the day. Prime was the first hour of daylight, so sunrise, and the time for the first set of prayers. The next set of prayers did not have to take place until the Third hour after that; three hours later, Sexte prayers took place, followed by Nones and finally Vespers, or evening prayers.

Because the length of time between sunrise and sunset varies throughout the year, the time between prayers was not precisely 180 minutes. With more regular timekeeping, fixed hours were designed for these times. Tomorrow I'll show you the canonical hours that are still used today.