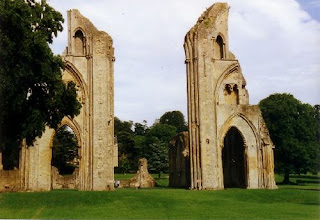 Glastonbury Abbey in Somerset may be the best-known of English abbeys. Originally founded in 712 with the construction of a stone church, it has been rebuilt and expanded many times. One of the expansions was under Dunstan (mentioned here) when he reformed it, expelled all the monks he considered unfit, and instituted the Rule of St. Benedict. It became an important site: King Edmund I was buried there, and an important charter of King Cnut's was disseminated from there.

Legend claims that an abbey was founded there in the 1st centuryCE by Joseph of Arimathea, the New Testament figure who provided the tomb for Jesus. This legend was described by Robert de Boron, a French poet of the late 12th century. His claim was that Joseph brought to Glastonbury 12 disciples as well as the Holy Grail containing drops of Jesus' blood, collected as he suffered on the cross.

For these and other reasons, Glastonbury became prominent as a pilgrimage site and a political power. A fire in 1184 destroyed the monastic buildings. Not wanting for money, reconstruction began right away, but the building of a large church and many buildings takes time. Pilgrimages—and the donations they bring—declined. In 1191, however, a discovery took place during excavation that would bring attention to Glastonbury once again, and shed light on an age-old legend.

But that's a story for tomorrow.