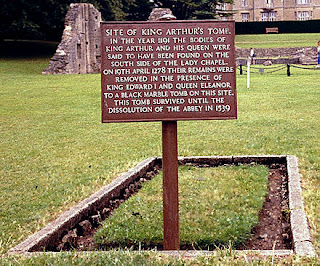 In 1184, Glastonbury Abbey was devastated by a fire in the monastic buildings. A new Lady Chapel was consecrated in 1186, after which progress slowed down. Pilgrimages—and the donations they bring—had fallen off.

In 1191, however, an excavation on the grounds was undertaken, inspired by (we are told) information passed onto King Henry II from "an aged British bard." The excavation turned up a large flat stone. On the underside of the stone a leaden cross was attached. When the cross was detached, on the side facing the stone they found letters proclaiming Hic jacet sepultus inclitus Rex Arturius in insula Avallonia ["Here lies buried famous King Arthur on the Isle of Avalon"]. Several feet below this was found a large coffin made from oak containing a very large set of bones, along with a smaller set. These were understood to be Arthur and Guinevere.

Well, pilgrimages soared, of course. The relics and lead cross were put in the church; a few eyewitnesses mention them, but they are long vanished now. So...what was it about? Does anyone today really believe that King Arthur's bones were found under Glastonbury? If the king were involved, what was his return on the investment?

Arthur was considered a national hero, and legend said he would return in time of the nation's need. Henry wasn't British: he was the current monarch resulting from the Norman Conquest of Britain. He didn't even speak English. Some have suggested that his involvement was to discourage Welsh nationalism by showing that their legendary king was truly dead and would never return. I believed this for awhile, until I noticed the dates involved.

That idea doesn't quite fit history. The story that Henry had the clue to finding the body comes from Gerald of Wales, a historian writing a few years after the discovery. Interestingly, Henry had died two years prior to the excavation, so Gerald's suggestion that Henry got his information from that anonymous British bard seems spurious to me. It is more likely that the Abbey itself arranged this to increase attention and income.

Henry was a fascinating character in his own right, however, and worth looking at next time.