I mentioned previously that St. Æthelwold had a single church dedicated to him in England. It is in Alvingham, in the East Lindsey district of Lincolnshire. Alvingham is old enough to have been listed in the Domesday Book, a record of all towns and territories in England made in 1086, 20 years after the Norman Conquest. In the Book, it is called Aluingeham, which means "Home of the Ælfingas." Ælfingas means "the tribe of Ælf," and ælf means "elf." 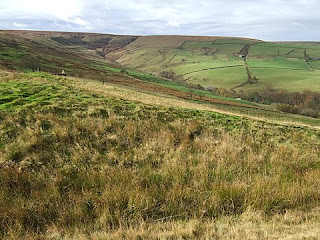 Ælf or elf can be found used throughout Germanic languages, and is commonly the first element in a name. Many of those can be found throughout this blog. Some common medieval names incorporating a prefix for "elf" were:

The word also appeared in place-names, such as Alvingham, Elveden ("Elves Hill"), and the Alden Valley, "Valley of Elves." The frequency of usage shows that elves were very much embedded in the culture of Western and Northern Europe.

The earliest references to elves, in fact, were from Old English medical texts. Elves were considered a source of illness in livestock and humans. Mental disorders and sudden sharp pains, for instance, were usually attributed to elves. Tomorrow I'll go into a little more detail, and take a look at an Old English text that dealt with the pain caused by elves.