Desiring with an ardent desire to liberate the Holy Land from the hands of the ungodly, we decree with the advice of prudent men who are fully familiar with the circumstances of the times, and with the approval of the council, that all who have taken the cross and have decided to cross the sea, hold themselves so prepared that they may, on June 1 of the year after next (1217), come together in the Kingdom of Sicily, some at Brundusium and others at Messana, where, God willing, we (the Pope) will be present personally to order and to bestow on the Christian army the divine and Apostolic blessing. [link, bottom of the page] 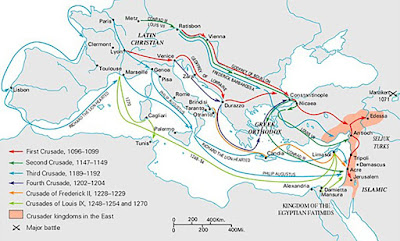 Thus begins the Holy Land Decrees at the end of the Canons of the Fourth Lateran Council of 1215. Pope Innocent was extremely motivated to call for a Crusade, not only because he was the pope, and restoring Jerusalem to Christian rule was important to him, but also because of the disaster that was the Fourth Crusade that got sidetracked and ransacked Constantinople in 1204. The Crusade effort needed to be carefully organized to avoid that outcome. The Decree continues:

Moreover, that nothing connected with the affairs of our Lord Jesus Christ be omitted, we wish and command that patriarchs, archbishops, bishops, abbots, and others who have the care of souls, diligently explain the meaning of the crusade to those committed to them...

The Council wanted to make sure the Crusaders were absolutely committed to the goal, in order to prevent being sidetracked. The Decree went a little further, and you have to give them credit for thinking ahead. Getting to the Holy Land from Europe meant going by water (an overland march would take many months), and travel by water had its own dangers:

Since the corsairs and pirates too vehemently impede assistance to the Holy Land by capturing and robbing those who go there and those returning, we excommunicate them and their principal abetters and protectors,

...and because no one wants any global distractions:

But, since for the success of this undertaking it is above all else necessary that princes and Christian people maintain peace among themselves, we decree with the advice of the holy council that for four years peace be observed in the whole Christian world,

So...with all this preparation, why does the graphic above show no Crusade taking place in 1217? What happened to the Fifth Crusade? See you tomorrow.