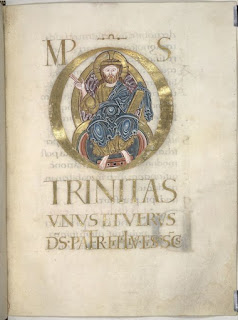 Of the countless people who lived in the Middle Ages and accomplished things—writing, building, etc.—a very few are remembered by name. One of them is Wulfstan, known as Wulfstan of Winchester or Wulfstan the Cantor.

A cantor sings liturgical music. The monk Wulfstan was a cantor of the Old Minster in Winchester, who became a precentor. A precentor is responsible for composing liturgical music himself, training the choir, and leading the choir or congregation in the music, singing solo lines to which they respond. He was a poet as well as a musician, and wrote a biography of St. Æthelwold, who was probably his mentor. He wrote several works, making him one of the most prolific Latin authors pre-Norman Conquest.

A 15th century commentary refers four times to a "Wulstan" and his work on musical theory, De tonorum harmonia ("On the harmony of tones"). It is likely that this reference is to Wulfstan; unfortunately, this work of Wulfstan's no longer exists. It would be the only known work on music written by an Anglo-Saxon. He is also responsible for the longest (3386 lines) Anglo-Latin poem extant, the Narratio metrica de S. Swithuno (A metrical narrative of St. Swithin).

The work for which he is best know, however, is the Vita S. Æthelwoldi (The life of St. Æthelwold), the principal source of information on St. Æthelwold, about whom I think we should talk next.