I mentioned that Emma of Normandy's mother was an interesting character. Gunnor (c.950 - c.1031) was a countess of Normandy by virtue of her marriage to Count Richard the Fearless. How they met is an interesting story—assuming it is true. Supposedly, Gunnor was living with her sister Seinfreda, who was married to a local forester. Richard heard of the beauty of the forester's wife and ordered that she be brought to his bedchamber. Seinfreda sent her unmarried sister, Gunnor, instead, saving Seinfreda's virtue and introducing Richard to the woman he would eventually marry. Besides Emma of Normandy, they had two other daughters and three sons. Gunnor was very active in the kingdom. She had the authority to certify ducal charters, she performed as regent of Normandy when Richard went on tours, and she was often used as a judge. She knew several languages, and had such a good memory that she was an important source of details for a history of the Normans written by Dudo of St. Quentin. 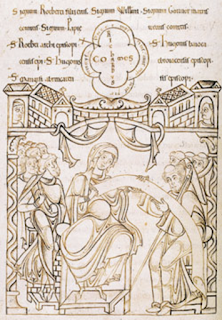 After Richard's death, she gave in a charter two alods to the abbey of Mont Saint-Michel for the soul of her husband. (An alod is a feudal property with no superior; that is, it did not owe a tithe to a higher lord, so any wealth of the property was the property of the owner, which was now the abbey.) The picture here is of her granting the charter.

Above, I said "the woman whom he would eventually marry." They originally lived together with Gunnor as his concubine. The Normans were fine with this, but when Richard nominated their son Robert as Archbishop of Rouen, the church would not recognize his legitimacy. Richard and Gunnor married "according to the Christian custom" in order to legitimize their children in the eyes of the church. The Norman custom of ... let's say "cohabitation" was called more danico, and I'll explain that a little more tomorrow.