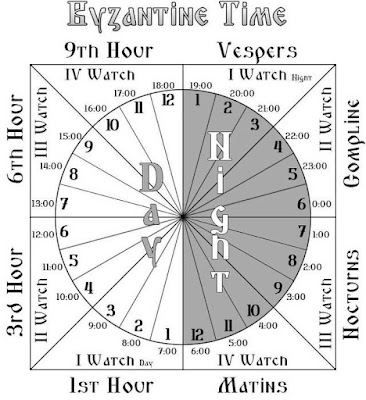 The prayers for the Canonical Hours were mostly from Psalms, but there were also humans and other Bible verses. Over time, the specific passages became more regulated, requiring a system for keeping them straight and making sure that everyone was following the same script.

Saint Benedict of Nursia founded communities of monks, and produced the Rule of St. Benedict for them to follow. By that time (the Rule was written in 516), the Hours consisted of seven daytime prayers and one nighttime prayer. (Very few people outside of monasteries were determined to get out of bed to pray.) The Breviary (from Latin breviarium, "summary") was created to combine Psalms, the schedule for each day, the hymns needed, etc. Breviaries were copied and shared with other monastic communities.

When Pope Innocent III learned of breviaries, he adopted them for non-monastic priests as well. They and the daily prayers are still adhered to today, although there are now various forms.

I mentioned hymns, and I think it would be interesting to discuss (and listen to) some of the music used as part of the Canonical Hours.