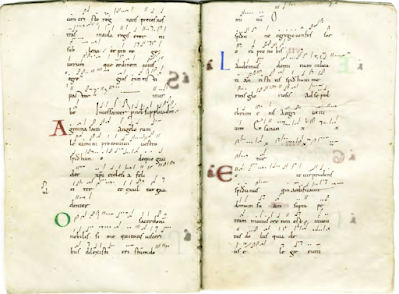 When priests and monks prayed the Canonical Hours, praising God through hymns was considered an important part of the experience. We are fortunate to have a thousand-year-old manuscript that holds many examples of the music used at such times.

The music is in two forms: liturgical plainchant and two-voice polyphony. Plainchant (or plainsong) is simply a collection of chants used in the Western European Catholic Church, in which all singers follow the same tune. It was the primary type of Christian liturgical music until the development of polyphony in the 9th century, when two or more singers would harmonize. The Winchester Troper's examples of polyphony are for two voices.

As usual with many early manuscripts, authorship is unknown. A person once connected with scribing the Troper, but now determined to have been dead by the time the Troper was put together, was a character called Wulfstan the Cantor. I'll tell you more about him tomorrow.